Two years on from Poland’s decision to effectively ban abortion, members of Abortion Without Borders have supported 78,000 people from Poland to access abortions safely.

In the last year, AWB has helped 44,000 people, with more than 1,200 able to terminate their pregnancies in the second trimester in clinics in other European countries. 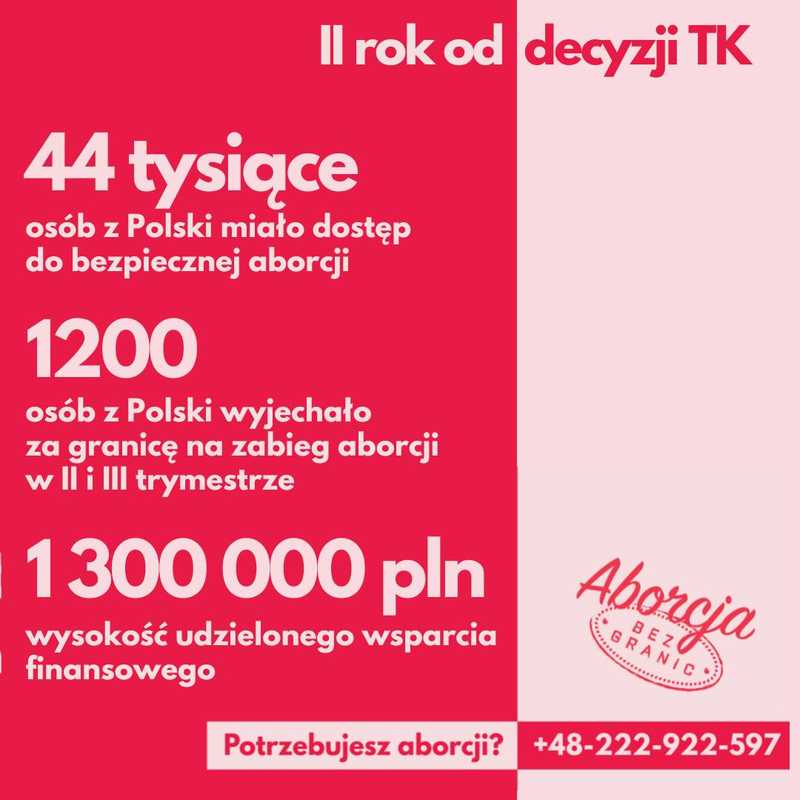 Friday 21 October marks two years since a Polish ‘Constitutional Tribunal’ ruled that abortion should be further restricted to no longer include cases of foetal abnormality. Even in cases where it is technically legally permitted (threat to life or health of the parent), it is still essentially inaccessible.

“Monika”: 19th week of pregnancy. During the amniocentesis at 16 weeks, foetal abnormality was detected, and she was diagnosed with a condition carrying a high risk of haemorrhage and pre-eclampsia. Monika terminated the pregnancy in a Dutch hospital. According to Polish law, Monika should have been able to terminate the pregnancy in Poland.

“Kamila”: 17th week of pregnancy. A scan showed the foetus was developing without a skull and would not survive. Kamila was refused an abortion in Poland. On the way to the Netherlands, she started bleeding heavily in a toilet at a petrol station and had to be transported to a German hospital, where she gave birth to a stillborn foetus in the emergency room. This pregnancy should have been terminated in Poland.

Since the beginning of the war in Ukraine, we have been approached by many people who have fled the war. From 1 March to now, we have helped 1,515 women from Ukraine access abortions. The vast majority terminated their pregnancies with pills at home, with only 21 Ukrainian women travelling to a foreign clinic with support from Abortion Without Borders.

In October 2020, a ‘Constitutional Tribunal’ ruled that abortion should be further restricted to no longer include cases of foetal abnormality. Even in cases where it is technically legally permitted (threat to life or health of the parent), it is still essentially inaccessible. In 2021, the Polish state carried out just 107 abortions.

Now, Polish people who need second trimester abortions mainly travel to the Netherlands, Belgium, Spain, France, and the Czech Republic to access care, with many of them arranging the treatment on their own.

At the two clinics in the Netherlands to which we most often send people for second-trimester abortions, 3 to 6 people from Poland terminate their pregnancies every day.

Polish pro-abortion organisations such as Abortion Dream Team are campaigning for accessible abortion on demand across Poland, while facing legal intimidation through the case against Justyna Wydrzyńska. Justyna is facing up to three years in prison for the intent to help someone access abortion pills in 2020, with the trial continuing in January 2023.