We don't need to be provocative or distracted 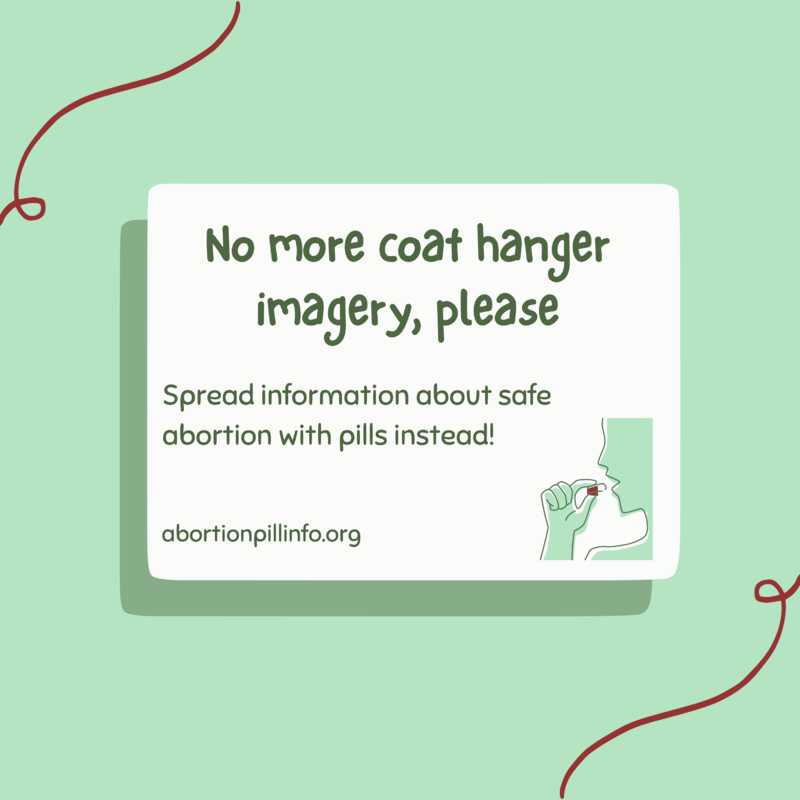 For decades, the coat hanger have been a symbol of the fight for safe abortion and  reproductive rights. Now, more than 100 days since Roe v. Wade was overturned, 66 abortion clinics have shut down, and over 1.3 million people have lost access to abortion care in their state. Abortion bans are getting overturned, frozen, and then reinstated every day, so it's hard to even keep track of what's happening. Coat hangers continue to appear on protest signs, along with statements like, "We Won't Go Back."

Back, of course, to the era of back-alley abortions, when people used coat hangers to terminate pregnancies, and many died of internal bleeding and sepsis. Good news: We won't go back, because we don't have to.

Using coat hanger imagery in reproductive rights and abortion justice activism erases the current reality of abortion - namely that abortion pills exist, and that they're safe. It turns out that a lot of people don't know that abortion pills are a thing, and if they do, they don't know the difference between abortion pills and emergency contraception. When someone who doesn't know about abortion pills sees those coat hangers, they believe that we actually have returned to an era with no options for access to abortion besides going to a clinic, searching for an underground provider,  or attempting to terminate with dangerous methods like, you guessed it, a coat hanger.

Coat hanger imagery provokes nostalgia, especially in folks who remember a pre-Roe United States. The imagery is provocative and distracting, but we don't need to be provocative or distracted, at least not at the cost of actual scientific information that people desperately need.

We need abortion clinics AND abortion pills. Everyone should be able to decide how to terminate their pregnancy without coercion, and when we exclude abortion pills from our abortion justice activism, we're taking away an option that's right for many people. So, instead of taking the time to draw a coat hanger on that piece of cardboard, or posting a picture of a coat hanger on social media, spread information about abortion pills. We aren't without options for safe abortion care, but if people don't know that they exist, they can't make decisions about their own health care.