Half a year later – Abortion without Borders supported thousands of people. 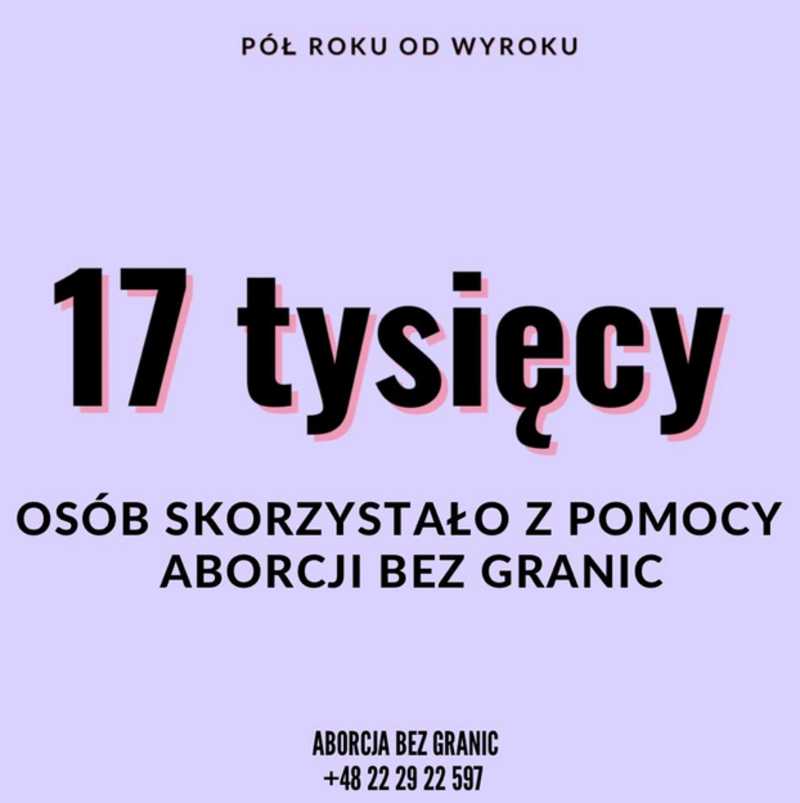 Exactly six months ago – on the 22nd October 2020 – the Constitutional Tribunal in Poland ruled that the performing abortion due to foetal defects in Polish hospitals is unconstitutional. Even though the decision came into force only at the end of January 2021, in practice the change worked immediately. Already on the 23rd October 2020 the first four people who had been refused abortion in Polish hospitals called Abortion Without Borders.

In the last 6 months the groups that make up Abortion Without Borders have helped thousands of people from Poland to access abortion. 597 people were able to terminate their pregnancy abroad in the second trimester. The financial support exceeded 420,000 PLN (£79,500)

▪       597 people have benefited from the support of the entire Abortion Without Borders initiative in arranging a second trimester abortions abroad.

▪       Of all 597 people who reported to the organizations that make up Abortion Without Borders, 163 people disclosed information about the presence of a foetal defect. Abortion in the Netherlands and England is available on request so a person does not have to give any reason for the abortion.

▪       Ciocia Basia, located in Germany, has received over 1,400 phone calls from people in Poland and has helped, within their own capacity, 260 people to access surgical abortion. 65 people had documents detailing foetal abnormality. 18 people were referred to Ciocia Wienia in Vienna. The financial support provided by Ciocia Basia and Ciocia Wienia exceeded 39,000 PLN (£7,382). The money was used to organize travel, pay for accommodation and cost of the abortion procedure.

▪       Abortion Network Amsterdam (ANA) from the Netherlands has helped 234 people (in that 75 people were supported outside the Abortion Without Borders) to access abortion in the second trimester of pregnancy and answered over 2,500 e-mails. 46 people had documents detailing foetal abnormality. The total amount of financial support provided by Abortion Network Amsterdam exceeded 13,000 PLN (£2,460) – the money was used to pay for the procedure, stay and travel arrangements and in many cases also for mandatory COVID tests.

▪       Abortion Support Network (ASN) operating in England has received 295 phone calls and 1,200 emails from people in Poland seeking access to abortion. 52 people had documents detailing foetal abnormality. The financial support provided by ASN to people from Poland was 369,000 PLN (£69,877) to people travelling to England, The Netherlands and hospitals and clinics elsewhere in Europe.

▪       The remaining number of people from the 597-total received support in organizing abortions abroad from more than one Abortion Without Borders organizations.

▪       Women Help Women - an international organization providing postal access to abortion pills has responded to over 46,000 messages from Poland. In the last 6 months over 10,000 people have benefited from the help of Women Help Women.

▪       Over 1,200 new people have registered on the forum of Kobiety w Sieci  - maszwybor.net. Since the 22nd October 2020, 171 people have had their abortion with the support of people from the forum, who also have experience with pharmacological abortions.

▪       Abortion Dream Team (ADT) has answered over 2,400 abortion queries. The questions were related to the support before, during and after abortion. ADT has accompanied over 490 people during pharmacological abortions in the last 6 months. Of these 490, 18 people were in second trimester - they were unable/unwilling to travel to an overseas clinic for the procedure and chose to take the pills. 445 people were seeking access to the morning-after pill. 100 people contacted the ADT's legal helpline.

▪       All together close to 200 people in second trimester of their pregnancies took abortion pills at home with support from the groups involved in the Abortion Without Borders Initiative.

▪       Having looked at the government statistics related to the implementation of the new law in Poland, we have concluded that Abortion Without Borders has taken over all the "statutory" abortions which used to be performed in public hospitals. The organization of abortion procedures for people in the second trimester of pregnancy rests on the shoulders of feminist organizations and informal groups and depends on money raised from donations.

Among those receiving support from all the groups that make up Abortion Without Borders were:

Kasia - a 15-year-old girl who was 12 weeks pregnant. She was afraid to tell her mother that she had slept with her boyfriend. Her mother asked her several times if her period was late. They had a good relationship but Kasia was terribly afraid that she would disappoint her. Kasia's mother called the helpline. The procedure in the Netherlands is scheduled for April 22 and they left for their trip at dawn today.

(Anita - name changed) was 13 weeks pregnant in a wanted and planned pregnancy. During the ultrasound, an extreme generalized edema was found. Due to the current law in Poland, Anita was told to wait until she miscarried. She was also told that in the worst-case scenario of carrying the pregnancy to term, "the baby will be born and will die after a few hours". Anita is thinking about going abroad. She is trying to discuss with her husband the option of taking abortion pills at home. She does not want to go to the Netherlands because she would have to leave their other small child with her family.

Maja is a 27-year-old woman from a small town in Podlasie. She did not expect to be pregnant; the positive test was a huge surprise for her. She made the decision quickly. She knew from the beginning that she was neither financially nor emotionally ready for another child and ordered the pills from Women Help Women. She took them in her own bed while breastfeeding her 11-month-old daughter.

Abortion Without Borders (AWB) was founded on the 11th December 2019 to help people in unintended and/or unwanted pregnancies in Poland and abroad. During its first year, more than 5,000 people turned to AWB for help in terminating their pregnancies. Since the 22nd October 2020 the number of people seeking abortion support has significantly increased. Abortion Without Borders initiative consists of Women in Network (Poland), Abortion Dream Team (Poland), Women Help Women (international), Abortion Network Amsterdam (The Netherlands), Ciocia Basia (Germany) and Abortion Support Network (England). Abortion Without Borders provides information about safe abortions (including pharmacological abortions), provides consultation before, during and after the abortion as well as supports financially, logistically and practically in organizing abortion procedures abroad.

▪       We reduce stigma around abortion, whether with pills at home or at a clinic abroad

▪       We never ask clients how they got pregnant or why they want abortions, but trust and respect the autonomy of pregnant people

▪       We ensure that “I can’t afford an abortion” is never the only reason someone has a baby, or another baby.