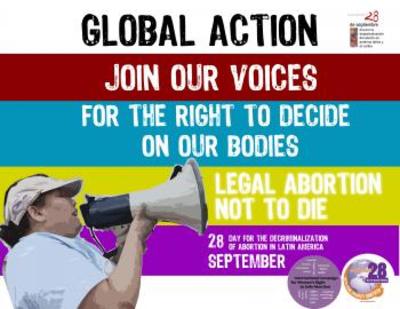 An important day just went by, marked by hundreds of events and campaigns and lots of noise around the world. Some of you may have never heard of it before, but to an abortion rights activist like me, it's practically a statutory holiday.

September 28 is the Global Day of Action for Access to Safe and Legal Abortion. The day originated two decades ago in Latin America and the Caribbean where women's groups have been pushing governments to decriminalize abortion and provide safe and affordable access. The date itself commemorates the abolition of slavery in Brazil in 1871, and came to be adopted by Brazilian women as the day of the "free womb."

In 2011, the day went viral and global, thanks to the Women's Global Network for Reproductive Rights, and later the International Campaign for Women's Right to Safe Abortion. Thousands of groups and partners around the world support and promote the day, with a wide range of activities happening in over 50 countries each year. The 2014 focus was on addressing abortion stigma as one of the main obstacles to improved access.

This year, a new international foundation called Women Help Women launched itself on September 28 in honour of the day. (Full disclosure: I'm proud to be part of this new feminist organization.) The group is a global forum to advocate for access to improved reproductive health services, while providing those services at the same time. Women can order contraception and medical abortion pills directly from the WHW website, while receiving expert counselling and information in multiple languages. WHW invites all pro-choice, feminist and human rights organizations to endorse the initiative, and to partner with us.

Although abortion is still illegal in many countries around the world, "do-it-yourself" (DIY) medical abortion means that it has become much safer compared to traditional methods such as inserting foreign objects in the uterus or ingesting poisons. However, there are still dangers when women buy dubious medication on the black market and take it without any instructions or medical supervision -- hence, the urgent need for groups like WHW, as well as Women on Web. The latter group courageously piloted the online provision of medical abortion in 2006, proving the viability and safety of this model.

The number of illegal and mostly unsafe abortions in the world has not declined since 2003, but the World Health Organization has documented a substantial 48 per cent decrease in the number of preventable maternal deaths from unsafe abortion -- most likely due to DIY medical abortion. In 2008, 47,000 women a year died unnecessarily compared to about 70,000 in 2003.

As the global community continues to adopt a rights-based framework that recognizes women's rights as human rights, it's becoming more difficult for anti-choice groups to prevail. This is especially the case in regions with high death and complication rates from unsafe, illegal abortion -- particularly Africa.

I track abortion news around the world, and just five years ago, the typical story out of Africa favoured anti-choice views and the criminalization of abortion. A sea change has been occurring, because a more typical story today is about a health professional in Uganda advocating legalization to stop the carnage of unsafe abortion, or this one about the Ghanian government implementing a safe abortion provision program.

That's not too say there aren't many horrendous laws and injustices still happening in Africa -- like this nurse who was recently sentenced to death for helping a woman get an abortion in Kenya. But overall, things are slowly improving.

In July, the African country of Mozambique passed a ground-breaking law that legalizes abortion under a range of circumstances, including to protect the woman's physical or mental health. Since 1994, at least 14 African countries have liberalized their laws to allow one or more exceptions, with several countries passing quite liberal laws, including South Africa, Tunisia and Ethiopia.

That reflects the steady progress since the adoption of the Programme of Action at the 1994 International Conference on Population and Development in Cairo, which recognized reproductive rights as human rights. In part because of the commitments that nations gave at that conference, a total of 30 countries have liberalized their abortion laws since 1994.

Still, progress is slow. In the past 20 years, more than one million women have died and over 100 million have suffered injuries due to complications of unsafe abortion. A handful of countries have passed even stricter laws since 1994, including the United States, Russia, Poland and Hungary. Sixty-six countries still prohibit abortion entirely or permit it only to save a woman's life.

Five countries in the world explicitly ban abortion for any reason whatsoever: Nicaragua, El Salvador, Chile, Dominican Republic, and Malta (in southern Europe). The four Latin American countries have all become quite infamous for either imprisoning women for having abortions or miscarriages (Mexico does this too), or just letting pregnant women die when they have obstetric complications or require a life-saving abortion. However, Chile is planning to liberalize their law soon as a result of international pressure. Other Latin American countries maintain restrictive laws except for Uruguay, which legalized abortion in 2012.

Turning to Europe, Ireland pretends to be "pro-life" with its 1983 constitutional amendment that subordinates women to fetuses, but the government and "pro-lifers" look the other way while thousands of Irish women travel to other countries every year to have abortions. Similar "abortion tourism" takes place out of other European countries with restrictive laws, including Poland, Hungary, Malta and Monaco.

The latest Irish barbarism (after the horrible death of Savita Halappanavar in 2012 because she was denied an abortion) is the case of Ms. Y, a refugee who was raped in her home country before discovering she was pregnant after moving to Ireland. She felt suicidal but was denied an abortion at 8 weeks, even though Ireland had just passed a new abortion law specifically to allow abortion in cases of suicide risk. Lacking papers, the woman was unable to travel outside Ireland for an abortion. She attempted suicide at 16 weeks. After repeated requests for an abortion, she finally went on a hunger strike in hospital, where she was still suicidal and six months pregnant. The hospital's response was to forcibly hydrate her until they decided to perform an emergency Caesarian section to save the baby. In other words, the young woman was treated as an incubator with no rights or dignity of her own.

These horror stories out of Ireland, Latin America and Africa make for scandalous headlines that do no favours to the guilty country's reputation. It also results in increased pressure on those countries to live up to their human rights obligations. That pressure doesn't just come from the many strong reproductive rights groups operating internationally. Some new "heavy hitters" have begun advocating for the decriminalization of abortion in recent years, including the United Nations, World Health Organization, Amnesty International, and Human Rights Watch.

Further, anti-choice governments at least in western countries are beginning to discover they are in danger of losing elections if they try to restrict abortion or reduce access.

Activists across Spain celebrated a major victory -- on September 28, ironically -- after the Spanish right-wing government was forced to shelve their proposed anti-abortion legislation due to widespread opposition from both within and outside Spain. Women carried out wonderfully creative campaigns and rallies across Spain and Europe. The proposed bill even divided the government itself, ending with the prime minister backing away from the bill due to election loss fears. The justice minister was forced to resign.

Here at home, the reigning Conservatives in New Brunswick were ousted in the provincial election on Sept. 22, after the abortion issue played a key role in the campaign (right up there with shale gas and forestry). The Conservatives tried to coast through on a "do nothing" promise, even though abortion access had been dangerously limited after the July closure of the Fredericton Morgentaler Clinic. The Liberals swept to power with a promise to eliminate barriers to access.

Access to safe and legal abortion is increasingly seen as a human right. Global progress towards that goal continues unrelentingly, despite setbacks, anti-choice opposition, and the United States. Fewer women are dying because they are taking pro-active control of their own lives by obtaining safer abortion pills. The harms of criminal laws are being recognized more and more, especially in Africa and Latin America. Ireland is embarrassing itself on the world stage. The United Nations has been calling other restrictive countries to account for their violations of women's rights. Human rights campaigners are getting stronger and more numerous and more optimistic about the future. The tide is inexorably turning in their favour -- and in women's favour. The clock will not be turned back. Welcome to our brave new pro-choice world.

Joyce Arthur is the founder and Executive Director of Canada's national pro-choice group, the Abortion Rights Coalition of Canada (ARCC), which protects the legal right to abortion on request and works to improve access to quality abortion services.