Wolf in Shuping’s clothing? (on hidden agendas, pseudo-sciences, and... the launch of Women Help Women)

When Martha Shuping spoke at Memorial University on Sept. 25, her talk was billed as a primer in helping women. The story behind the headline was not so clear-cut.
The following article written by Robin Whitaker for www.theindependent.ca explores the story behind Shuping and announces the launch of Women Help Women. 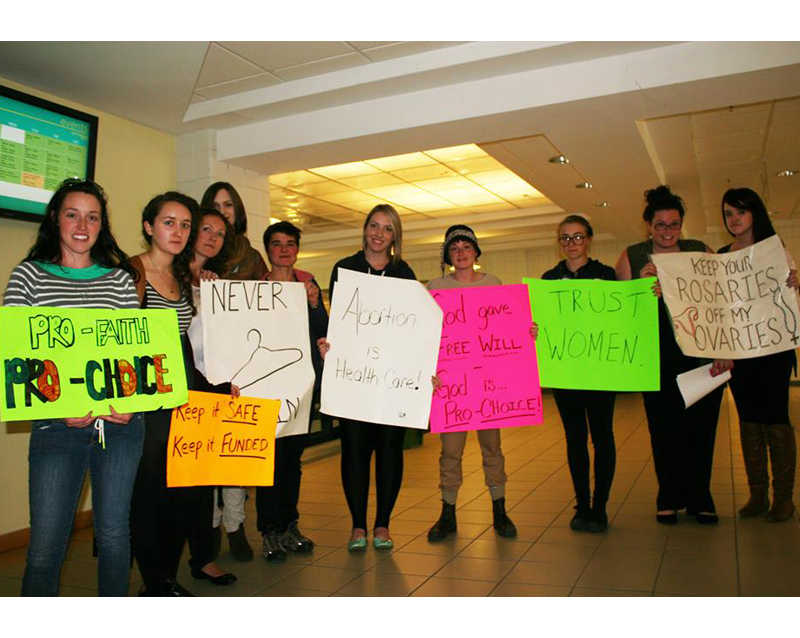 The first I heard of Martha Shuping was when a nursing student tagged me in a late-night Facebook post linking the announcement that Dr. Shuping would be speaking on campus the next day. By morning, increased rumblings from faculty and students wondering how to respond to Shuping’s anti-choice message and the apparent credibility university agencies were granting it, led several of us to attend her talks.

In fact, there was nothing overtly alarming in Shuping’s advertised topic: “Abortion and Mental Health: Identifying Who Is at Risk and How to Help.” Much of what she said sounded quite reasonable too, although she never did deliver the promised advice on specific counselling techniques.

Her talk centred on two women who were pressured into abortions they didn’t want. She used these to illustrate various circumstances that heightened the risk of psychological distress after an abortion. (The stories seem to be a bit of a party piece for Shuping; curious readers can find themhere.)

As for the “risk factors”, most seemed uncontroversial, even self-evident. Who would deny that coerced abortions are likely to create problems? Or that women who feel they must keep abortion secret, or hold religious or personal beliefs at odds with abortion, may experience psychological distress? And who would object to providing appropriate support – or, more to the point, working to ensure nobody is pushed into an unwanted abortion in the first place?

Yet there is a more insidious agenda at work here.

Shuping is a self-proclaimed expert in “post-abortion issues”. Phrasing like that is a red flag (not the good kind) for pro-choicers, and a glance at Shuping’s CV shows the suspicion to be justified.

Her credentials include papers suggesting that abortion puts women at heightened risk of drug and alcohol abuse and psychiatric problems, even “bad parenting”. If the American Psychological Association and other medical researchers have taken such claims apart—not least for the basic flaw of confusing correlation with causality—anti-choice organizations treat them as “scientific evidence that abortion hurts women”. Shuping herself thinks women should be told that abortion “increases the risk” for psychological problems much in the way that cigarettes “increase the risk” of various health problems.

Dr. Martha Shuping has written that abortion puts women at heightened risk of drug and alcohol abuse and psychiatric problems. Such claims have been refuted by the American Psychological Association and other medical researchers. Photo by Russell Cochrane.

Her organizational affiliations are also telling. She’s a facilitator for Rachel’s Vineyard, a “ministry of Priests for Life” (and a key reason for her visits to St. John’s). She sits on the board of PATH-Post Abortion Treatment and Healing, a faith-based organization dedicated to“eliminat[ing] the demand for abortion” through education and outreach. And she has collaborated directly with such organizations as the Society for the Protection of Unborn Children, and the Elliot Institute, which claims to be both“pro-life” and “pro-woman”.

In short, while she presents herself as an advocate for women, Shuping’s work and affiliations add up to a program whose default approach is not just paternalistic—women can’t be trusted to make their own choices; they need “experts” to protect them against decisions they might later regret—but would outright restrict the availability of abortion.

The trouble with neutrality

It’s a no-brainer that pro-choice advocates will not like Shuping’s message then. Does that justify objecting to her presence on campus though?

Shuping’s visit was organized in part by the Christian Medical and Dental Society and the MUN Campus Chaplaincy. Fine. We enjoy freedom of expression, thought and religion in this country. Faith-based groups can bring in any speaker they want. As this column shows, those who disagree can respond in kind.

The university Counselling Centre’s co-sponsorship of the presentations is a different matter. For while she was cagey about saying so directly in her presentation at the University Centre, the type of counselling Shuping promotes sends the clear message that abortion is bad. Her work supportsorganized attempts to restrict, not improve, abortion access. These are very simply at odds withwomen’s health interests.

To be fair, I suspect Counselling Centre staff simply didn’t know what they were endorsing with Shuping. And certainly, the Centre’s response when approached by concerned students and faculty shows an appreciation for why many were dismayed at their involvement.

Foremost, we need to reject the idea that abortion is an exceptional issue, so controversial that all sides deserve equal airplay and equal respect. To most Canadians, there actually is no controversy. Sixty per cent are happy that Canada has no legal restrictions on abortion. Only six per cent support an outright ban.

However, the widespread assumption that abortion is singularly contentious has allowed anti-choice activists to punch way above their weight.

In the media, they benefit from the journalistic convention of “balance”, where the pro- and anti-sides are presented as equivalent and, by implication, equally valid. They are not. (Shuping herself got a lengthy interview on CBC Radio, on the back of her campus visit.) The price of this know-nothing approach is paid in women’s health, women’s autonomy and all too often in the developing world, in women’s lives.

In parliament, the antis have benefited from politicians’ willingness to let abortion travel under the “conscience clause” flag. What other policy areas get that kind of treatment? Thus, Justin Trudeau’s insistence that Liberal MPs must support the party’s position on reproductive choice—just as they would fall in on matters of finance or education—is quite simply a sensible approach to a routine policy issue.

To end with a bit of good news and a disclosure statement along the way: Women Help Women was launched on Sept. 28, the Global Day of Action for Safe and Legal Abortion. I am very happy to be part of this new feminist organization, which is committed to supporting women’s autonomy in themost direct way possible. Check out our website to see what I mean.